Please allow 7-15 days for delivery of this item

The fate of the human body after death is a subject that has fascinated enquirers, both in the scientific and legal realms for millennia. However, objective research into the causes and nature of human decomposition has only taken place in the last two centuries, and quantitative measurement of the process as a means of estimating the time of death has only recently been attempted. The substantial literature concerning this research has been published in numerous scientific journals since the beginning of the nineteenth century. Human Body Decomposition expands on the current literature to include the evolving research on estimating the time of death. This volume details the process of decomposition to include early period after death when the body cools to ambient temperature, and when the body begins to putrefy. This process is significant because the estimation of the time of death becomes increasingly more difficult when the body begins to putrefy. Deception in the Digital Age : Exploiting and Defending Human Targets through Computer-Mediated Communications 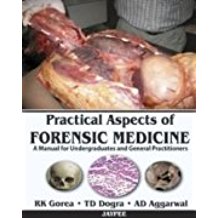 Practical Aspects Of Forensic Medicine: A Manual For Undergraduates And General Practitioners Human Remains: Another Dimension : The Application of Imaging to the Study of Human Remains

The Synopsis Of Forensic Medicine And Toxicology 29Th Edition